ANGLE is middleware developed by Google that serves as an OpenGL compatibility layer on systems where OpenGL support is either spotty or missing entirely. It converts OpenGL calls to Direct3D 9/11.

In this video, you will see ANGLE being used on RetroArch UWP. In specific, it allows us to run OpenGL cores now on the Xbox One, where only Direct3D 11/12 are available as graphics APIs. Mupen64plus Next is shown running in this video on an Xbox One S with fairly acceptable results.

Will this be ready for the next version?

What usecases are there for using ANGLE instead of regular OpenGL?

There are several scenarios imaginable where you would want to use ANGLE. Here are some of them –

We will fill you in as things develop how ANGLE will fit into RetroArch’s future releases. For now, the path seems clear – separate core versions for the emulators that have viable OpenGL ES 2/3 codepaths, and separate binaries at least on Windows desktop for an ANGLE-enabled and non-ANGLE enabled version. The redist (redistributable) will also need to be updated to include the extra dynamic library dependencies.

Up until now, we had three versions of RetroArch for macOS/OSX users:

We are now adding a fourth one:

If you have relatively modern Mac and you want to enjoy the latest in cutting edge technology, you should definitely try out this latest version. Get it by going to our Downloads page, and click on the download link below macOS High Sierra (or later). 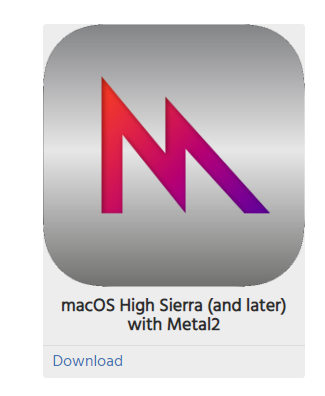 Some important things you should know about Metal 2 – not all of the devices that can run macOS 10.13 necessarily support this. Here is a compatibility list of all supported hardware:

What is Metal, and why is it relevant?

Up until the ’10s, Mac OS X has relied on the crossplatform OpenGL API to provide hardware accelerated rendering to developers writing Mac applications. However, since 2014, there has been an industry-wide push towards lower-level APIs, and Apple in specific decided to go with its own proprietary graphics API. This API is called Metal, and was first premiered with iOS 7 and Apple A7 devices. It has since some years ago made the switch to macOS as well, and this year the API has been bumped to version 2.

Apple has announced OpenGL will be deprecated in the future, its graphics driver stuck with the dated OpenGL 4.1 spec for years now. While we regret this industry wide push away from a standardized, cross-platform graphics API, we have been forced to move with the times and instead cater to all the major graphics APIs. There is no longer the potential for one single graphics API to cater to all platforms.

With the release of RetroArch 1.7.4, we have achieved an important milestone: we now have fully functioning graphics drivers for the three major next-generation graphics APIs. This includes Khronos’ Vulkan API (added to RetroArch since 2016), Microsoft’s Direct3D 11/12 (added to RetroArch since earlier this year), and now Apple’s Metal 2 for macOS. Thanks to Hans-Kristian Arntzen’s SPIRV-Cross middleware, we can reuse the same shaders across Direct3D/Vulkan/Metal. We therefore are very close to having a universal shader specification that will work on all the major platforms.

We are now ready for a future when Apple will outright kill OpenGL support, while at the same time we have ensured that we have one common set of shaders that can be used across all these video drivers. The developer who has added Metal 2 support to RetroArch has already indicated he intends to bring this over to iOS and tvOS as well. And who knows, maybe even backwards compatibility with Metal 1 could arrive.

How complete is the Metal video driver right now?

Fairly complete. You get:

Things that have still yet to be added which the author is considering adding: