We’re happy to announce that RetroArch is now available on the Samsung Galaxy Store! For free, of course.

How can I download RetroArch from the Galaxy Store?

The Galaxy Store should be pre-installed by default on Samsung phones. It is a storefront available exclusively for Samsung-branded devices.

Open the app on your device, type in RetroArch in the search bar, and download it from there.

How does this version differ from the Google Play Store version?

The version available on the Galaxy Store is identical to the version you can download from our website.

Should I use this version or the Google Play Store version?

Bottom line, we anticipate the Google Play Store version to become more and more nerfed as time goes on unfortunately. There is nothing we can do about this, these are restrictions and limitations imposed by Google to have the software available for distribution on the Play Store. To get a more full-featured version, download the Galaxy Store version.

RetroArch should now be available on the Google Play Store, Amazon App Store, Huawei App Gallery, and Samsung Galaxy Store. No matter what device you are on and which ecosystem you are in, we try to have you covered. 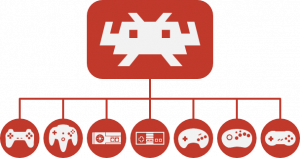 Remember our previous article back in August? We could no longer update RetroArch to the newest version on the Google Play Store because their policies had changed with regards to the use of externally hosted dynamic library files.

Right after this, we suffered from the crippling buildbot server hack which really set us back. Hence we haven’t been able to address the situation as of yet.

Now, though, thanks to your help and support, we are finally on the cusp of having a solution that we hope (and think) will satisfy nearly everyone.

RetroArch on the Google Play Store is going to be different now from the version you can download on our website.

The Google Play Store version has the following plus and minuses:

– The Core Downloader no longer connects directly to our build infrastructure – in accordance with Google Play Store’s new policies, this had to be changed.
+ Instead, you will be able to select from 50 hand-curated libretro cores to download from within the application. These cores are downloaded from Google’s servers instead.

Why only 50 cores? Unfortunately, if we don’t want to cut off support for Android OS versions lower than 8.0, we have to limit it to this number. However, there are two alternative :

RetroArch64 has now transformed into RetroArch Plus! What separates this version from the regular Play Store version?

So if you have a newer device, going for RetroArch Plus is a straight upgrade instead of sticking it out with the regular RetroArch version. In addition to this, all the pros and cons of the regular Play Store version also applies to this version.

Of course, there is also a third option:

This is RetroArch as you have always known it up to this point on Android. It has the Core Downloader which pulls from our build infrastructure, you are not limited to an arbitrary amount of cores, and it retains the same backwards compatibility as earlier versions.

The only caveat is that this version will only be available on our website from now on. Right now, this version is only available in nightly form, but once we release 1.9.1 (which should be pretty soon), you’ll be able to get it as a stable release as well.

+ Because we no longer have to care about this non-Play Store version having to be uploaded to Google Play, we no longer have to make sure the APK stays within the 100MB threshold. This means we can finally package all the assets into the APK, giving you more overlays, borders, shaders, etc. Previously we had to strip some of these out to save on space.

What you should know as a Play Store Edition user

Important for people who upgrade from previous versions –

Instead of having an option in the online updater to update all installed cores at once, that option is replaced by the “Switch Cores to Play Store Versions” option. This is a one-time step that replaces any cores on your device with versions from the Play Store. It’s a necessary step for users to receive core updates on the Play Store going forward. Any cores that the Play Store can’t provide (that are outside of the 50 or 127 predefined cores for example) will remain on the device as is.

To do this, go to Online Updater -> Switch Cores to Play Store Versions.

You can still sideload cores

While it’s not possible anymore to download cores directly from our servers with the Core Downloader, it is possible for you to sideload any core you have downloaded manually. To do this, you need to unzip the core you want to install to your Android device. Then go to ‘Load Core’, ‘Install or Restore a Core’, and select the (unzipped) core you want to install.

The Play Store version has been submitted to the Google Play Store, and after we have passed initial approval, it should be available shortly.

RetroArch Plus is available here.

We hope that you understand we have tried to do the best possible to make sure that people can continue using and enjoying RetroArch on Android despite the increased limitations. Supporting three separate versions instead of one certainly adds to our workload, but with our new infrastructure we feel we are able to handle it. A huge shoutout to farmerbb for putting in an incredible amount of work during this Holiday period to ensure that this has been rolled out successfully. We would have never been able to do it without him!