We are delighted to announce that the Beetle PSX dynarec bounty is finally entering its public beta stage and is available to the public right now!

The dynarec project for Beetle PSX would not be where it is today without the combined efforts of simias, pcercuei and Zach Cook!

What’s this all about?

In 2017, we started a bounty for Beetle PSX, our own heavily modified fork of Mednafen PSX that has pretty much become its own thing at this point. Mednafen PSX is a highly accurate PlayStation1 emulator. However, unlike emulators like ePSXe, it only has a CPU interpreter, which means that the emulator is fairly slow and is therefore not really usable on anything but desktop PCs and high end mobile phones. The bounty was created on BountySource in hopes of attracting someone who could add a dynamic recompiler to Beetle PSX so that it could run much faster and therefore be a viable emulator on lower end hardware, such as mid range mobile phones, game consoles, older PCs, etc.

What pcercuei and Zach Cook have come up with is a Lightrec-based dynamic recompiler implementation. Zach Cook has done most of the integration of Lightrec in Beetle PSX, while pcercuei did Lightrec itself. Lightrec is pcercuei’s dynamic recompiler for MIPS that uses GNU Lightning as the backend. There should be working implementations for nearly all system architectures, from x86 (64bit/32bit) to MIPS and ARM (64bit/32bit). It bears mentioning that pcercuei also already has Lightrec hooked up to PCSX Reloaded, and used this as a testbed.

The dynarec is available for the following platforms:

We are able to confirm that the performance gains for x86 and x86_64 are significant, as you can see down below (see Performance tests). We don’t know what the results are for ARM Linux, let us know how it performs!

* Performance right now is pretty bad for the Android and macOS platforms. We hope that after the public beta test, performance will improve a lot for these platforms. So while there is a framerate gain, it isn’t anywhere near what it should be.

How to use it – what the options do

First, update your Beetle PSX cores. We already explained before but we’ll repeat it here for the sake of it –

Once you’re on the latest core, you’ll notice that a lot more options show up now when you go to Quick Menu -> Options. We’ll go over these options and we’ll explain what they do.

NOTE: The dynarec is disabled by default – the default setting is still ‘Beetle Interpreter’. So if you’re wondering why things aren’t automatically faster, set it from Disabled to ‘Max Performance’ in Quick Menu -> Options. 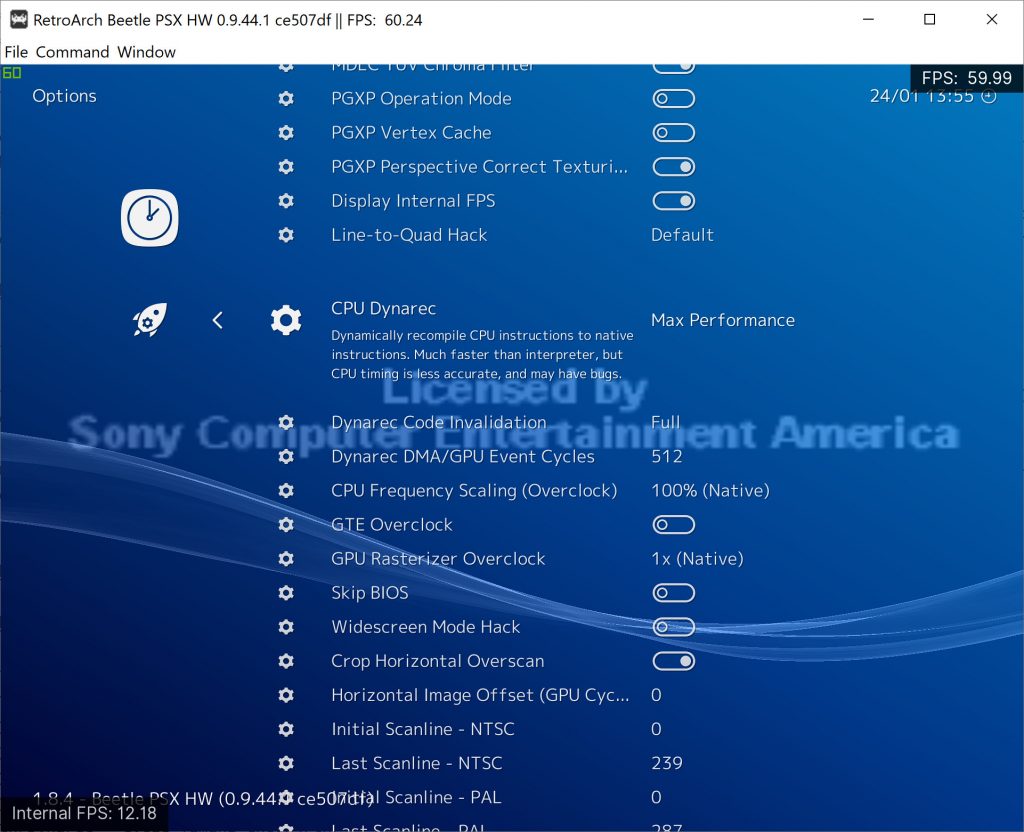 Dynamically recompile CPU instructions to native instructions. Much faster than interpreter, but CPU timing is less accurate, and may have bugs.

Disabled (Beetle Interpreter) – This is the default setting, dynarec is disabled. This uses the default Beetle interpreter that has been used in Beetle PSX all up to this point. It’s faster than Lightrec Interpreter (for now) but much slower than any of the dynarec modes. We don’t recommend you use this unless ‘Max Performance’ or ‘Cycle Timing Check’ won’t work well for you on the game you’re trying to play.

Max Performance – Dynarec enabled with all features enabled. Should be the fastest option, but some games might require the ‘Cycle Timing Check’ mode instead.

Cycle Timing Check – Dynarec enabled, but with cycle timing check which makes it a fair bit slower. Some games might need this setting in order to work properly, so if you find that Max Performance has bugs with a game, try this mode instead.

Lightrec Interpreter – This is the slowest mode right now. It’s basically in the same ballpark as Beetle Interpreter but the Beetle one is actually faster. It’s basically Lightrec running in CPU interpreter mode instead of dynarec mode. We don’t recommend you use this.

Some games require a Full invalidation, some require DMA Only.

How many cycles can pass in the CPU before a GPU or DMA update is checked. A higher number will be faster, but also more likely to cause bugs or crashes. This option has much less impact on performance with Beetle Interpreter than any of the dynarec modes.

* PGXP right now is disabled if you use any of the Dynarec modes. So don’t bother enabling PGXP modes for now when you use the Dynarec modes, you’ll just lose performance while gaining absolutely nothing. We hope that we are able to come up with a solution for this later.

* Make sure ‘Renderer’ is set to ‘Software’ if you want to use runahead. We recommend for runahead purposes you stick to 1x Internal GPU Resolution as even with the dynarec enabled, it can still be stressful on the CPU to go any higher than 1x with software rendering.

These are the current compatibility issues I have been able to notice on Windows.

Parasite Eve 2 (USA) (Disc 1)
Won’t continue from start with dynarec. It will freeze at the ‘Published by Square Electronic Arts’ screen.

Street Fighter Ex Plus Alpha (USA)
If you lose a fight and then select Continue, it will hang

WORKAROUND: By setting CPU to 90%, you can workaround this issue.

Another big announcement at the end of the weekend

We have even bigger things for you in store by the end of this week. So stay tuned, because we have lots more to talk about very soon! It’s time to get the 5th gen out of the way and have it preserved for posterity! 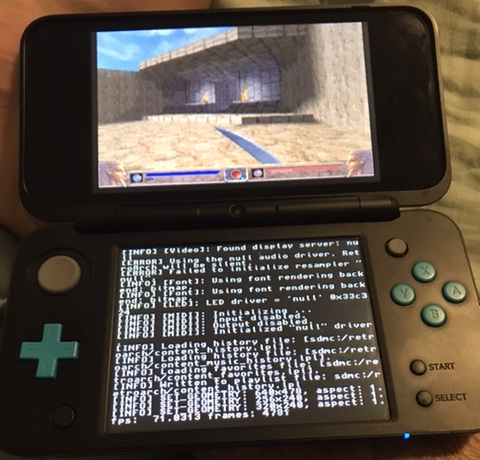 NOTE: When talking about 3DS in this article, we actually mean the New 3DS. Don’t expect old 3DS to be able to emulate many games at fullspeed.

The Nintendo 3DS is a great little portable RetroArch machine. Especially for classic systems: it has all the buttons you need, and the screen is sharp and pixel-perfect. We’re happy to share a few improvements to RetroArch 3DS that make it even better.

Full-speed cores from the homebrew menu

There are a few different ways to run homebrew apps on the 3DS. Until recently, you could only run cores with a dynarec turned on, such as gpSP and PCSX ReARMed, if you installed the .cia version of RetroArch to the home menu.

On setups using Luma3DS 8.0 or higher, these dynarecs now run when launched as .3dsx files from the homebrew menu, for those who prefer to keep their home menu clean — there is no difference in speed between .cia and .3dsx.

PCSX ReARMed has graphics and sound plugins, and some plugins are better suited for certain systems than others. Until now, the 3DS has used the P.E.Op.S. graphics plugin, which is reasonably accurate, but slow. We have just changed the 3DS builds to use PCSX4ALL’s Unai renderer, which is less accurate, but much faster. In many games, 10-20fps faster!

This means that on the New Nintendo 3DS, many PSX games will run at a full 60fps — outside of FMVs, loading, and special effects. But this next feature improves even those:

CHD is a compression format that works great for disc images, losslessly shrinking CD-sized games into something more manageable. Support for CHDs was added to PCSX ReARMed by [fulfilling a bounty] earlier this year, but that support didn’t carry over into the 3DS version.

Now, CHD support has been enabled on PCSX ReARMed on 3DS. This means you can share the same images between RetroArch versions, the images will take up less speed on your SD card, and they will load (and run!) significantly faster than .bin/.cue files. This greatly reduces framerate dips, especially during FMVs and loading zones.

When you combine the faster renderer with CHD support, a lot of great PlayStation games run at full-speed on the New Nintendo 3DS! Try it out today: the updated core is currently available in the latest nightly versions, and will ship with the next RetroArch release.