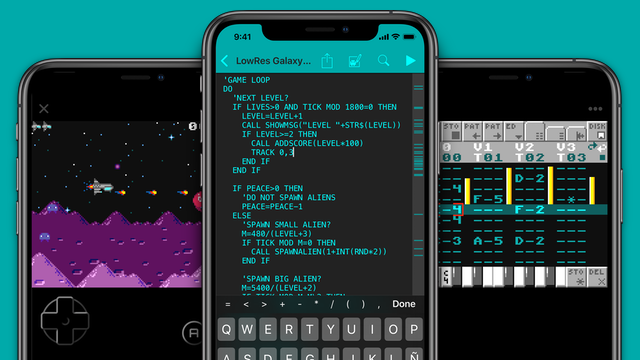 We recently released a LibRetro core of LowRes NX. Most of you probably never heard about it before, so what is LowRes NX? You may know the fantasy consoles PICO-8 or TIC-80. These are retro style platforms to develop and play little games, but without actual hardware. Something like emulators for invented consoles. LowRes NX is based on the same idea, but has some significant differences.

Imagine LowRes NX as a handheld game console with a d-pad, two action buttons and a little rubber keyboard below a slidable touchscreen. LowRes NX was inspired by real 8- and 16-bit systems and simulates chips for graphics, sound and I/O, which actually work like classic hardware. It supports hardware sprites as well as hardware parallax scrolling, and even offers vertical blank and raster interrupts to create authentic retro effects.

The programming language of LowRes NX is based on second-generation, structured BASIC. It offers all the classic commands, but with labels, loops and subprograms instead of line numbers. Graphics and sound are supported by additional commands and you can even access the virtual hardware directly using PEEK and POKE. You have complete control over the program flow, there is no standard update function to implement.

LowRes NX includes all the tools you need: The Character Designer for editing sprites, tiles and fonts, the Background Designer for tile maps and screen layouts, as well as the Sound Composer for music and sound effects. All of these are just normal BASIC programs. You can change and improve them or even create your own custom editors.

LowRes NX has stand-alone applications for MacOS, Windows, Linux and iOS, which can be used to develop new games (even on iPhone). Although the LibRetro core doesn’t support development, it’s finally a way to play your games on many previously unsupported platforms.

Have a look at the website, where you can play all games made by the community online:
https://lowresnx.inutilis.com/

Where do you get LowResNX for RetroArch?

You can get it from RetroArch’s built-in Core Installer on the following supported platforms: