PlayStation used a special unit called the MDEC to decode full motion videos instead of relying on software rendering (like the Saturn). These videos were encoded in YUV macroblocks and had to be converted from YCbCr to RGB so that the PSX can output the final image to the screen. A common issue with PlayStation emulators is that the chroma channel generally should be smoothed, but the PlayStation tend to leave it unfiltered.

There’s now a feature called ‘MDEC YUV smoothing’ which does filter the chroma channel. You can see the before/after screenshot above (video in question is the Resident Evil 1 intro) to see the kind of visual enhancement this brings to the picture. 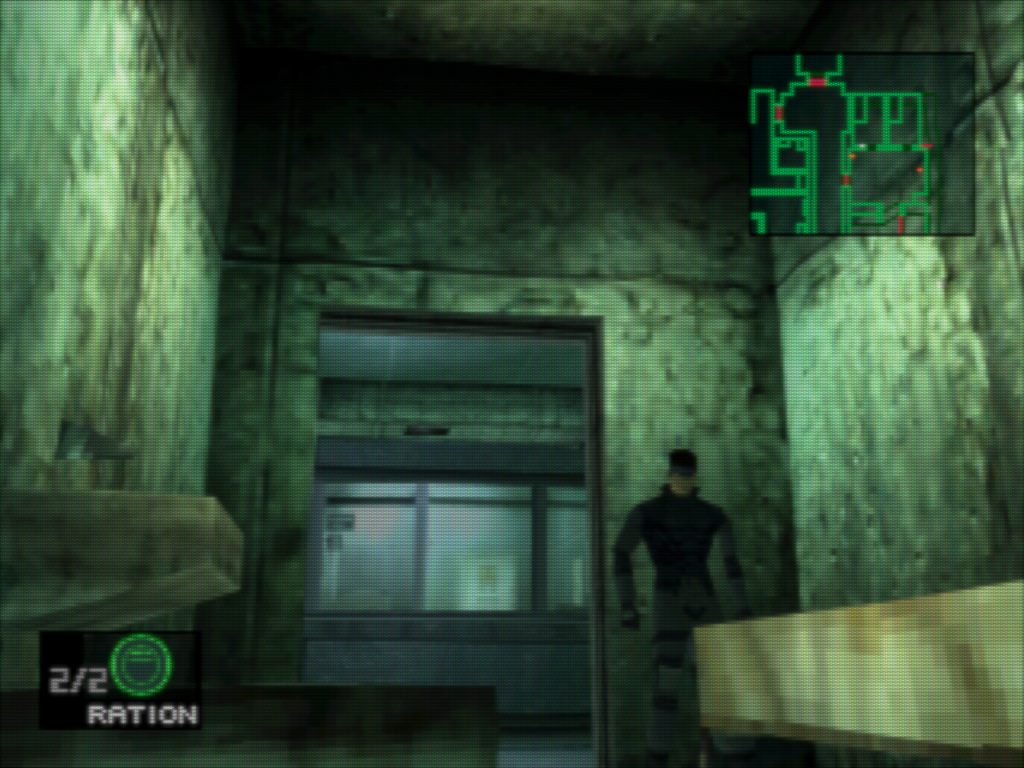 Some people prefer to play PlayStation1 games at native resolution and just applying a CRT shader at the end instead of running them at very high resolutions. However, there are some issues with that approach. 3D polygon graphics can tend to look very aliased and jagged and lacking in definition.

Alternatively, others like to crank the resolution up as high as possible. Both approaches have their pros and cons, but a definite disadvantage is that early 3D was very primitive so you might not want to see razor sharp angular polygons rendered at obscene resolutions, especially when a game relies a lot on pre-rendered backgrounds and other 2D elements. The Final Fantasy and Resident Evil games come to mind for one.

This new Vulkan-only option, SSAA, is a completely new approach. The image is rendered at the internal resolution you set it at (2x/4x/8x/16x, you name it). It then downsamples it at the final output stage back to a resolution somewhere in the ballpark of 240p. What you get is a low-resolution image with very clean anti-aliased 3D, kinda similar to the N64 actually which had native 8x multi sampled anti aliasing of some sort.

Certain CRT shaders expect a 240p-ish image to look their absolute best, so this option lends itself very well to that. It also can tend to look bit more coherent with mixed 2D and 3D in cases where adaptive smoothing fails.

Tip: We recommend you turn dithering off when using SSAA (Super Sampled Anti-Aliasing).

PlayStation and N64 output the final image at 16 bits per pixel. Since that isn’t a particularly wide colorspace, both systems used dithering in order to fake the illusion of a larger palette of colors. This combats color banding and wouldn’t be very noticeable at native resolutions on a CRT TV. On more powerful hardware and when emulated, the limitations of this approach become clear, and some would prefer either internally rendering the dithering at the internal resolution, or disabling it altogether.

Dithering was previously ignored by the Vulkan renderer and was always turned off, no matter what you configured. Now it will actually let you enable it. If dithering is enabled, the scanout image will be 16 bits per pixel. If it is disabled, the scanout image will be 32bits. We recommend that you turn dithering off if you are going to be using ‘SSAA’ (Super Sampled Anti Aliasing)

So, what have we been up to?

The Dolphin libretro bounty has led to this rebasing of the Dolphin libretro core. It is now up-to-date with the latest sourcecode, and it now supports OpenGL, Direct3D11 and Vulkan! It is even available for RetroArch on Android right now, provided you use the AArch64 version (since Dolphin itself requires a 64bit CPU on Android anyway).

In addition to this, I have also taken a look at porting Ishiiruka (a Dolphin fork) to Libretro. This one is not as far along yet as the mainline Dolphin core, but we are already making steady progress with the OpenGL renderer!

There will continue to be improvements to the WIMP UI in RetroArch 1.7.4. One of the big new features will be a fancy grid view. Previously, the WIMP UI only had a list view.

Some important bugs have been fixed. Finally, mask bit emulation has been (hackishly) implemented by flyinghead for the OpenGL renderer, so Silent Hill’s fog finally displays properly. iCatButler has made PGXP much more robust over the past few weeks, which has led to many rendering bugs being fixed when PGXP is enabled.

You can read about all of our improvements to the Reicast core in this separate blog post here.

The beam racing bounty has fetched $1132 so far!

RetroArch is already at the tip of the spear when it comes to latency mitigation strategies with features like runahead, configurable max swapchains, frame delay, custom video context drivers, etc. Beam racing is a new lagless VSYNC technique has been developed that is already implemented in some emulators like WinUAE. The aim of this bounty is to finally implement it in RetroArch as well, and the users/devs that want it have put their money where their mouth is for this particular feature!