The larger design goal behind Libretro is to make programs modular. To us, modularity means that a program should run from within the confines of a dynamic library, and that it should be possible for this program to then run inside any of the libretro-compatible players that exist out there.

In order to make a libretro core as it stands right now, you need to be familiar with how the API works. There is some obligatory documentation available for this purpose but we understand that API familiarity is still not where it should be, and that to some developers out there looking to get started with libretro, it might be intimidating to get started.

To that end, we are searching for ways to ease the difficulty and learning curve that comes with getting to grips with Libretro. We know that SDL for instance is already heavily used out there by game developers and emulator creators alike.

SDL and libretro cannot reasonably be compared. The entire purpose behind Libretro is to make a cohesive, consistent ecosystem of modular programs that, like a plugin, can be inserted into any frontend player that supports our API. Something like SDL is more generic in that it doesn’t really care what your program is going to be; it just acts as convenient middleware for your program so that you don’t have to write against a myriad of programming APIs across all the various platforms. And while libretro allows for something of that nature too, it does so with distinct design goals in mind that are more or less forced on you for the purpose of a better play experience.

SDL Libretro is a project that was started out by me half a year ago. Back then it was more or less in an unusable state. To date, I had ported a couple of SDL programs already to libretro (like NXEngine), but previously I always did so by manually baking in parts of SDL and then shoehorning the runloop such that it would fit inside libretro. A libretro core’s runloop consists of a ‘lifebeat’ that lasts for exactly one frame, which can pose a problem for many SDL programs, because how the programmer implements the runloop there is entirely up to the programmer, whereas libretro forces this runloop model on you. It does this for good reasons, so that the frontend can easily do advanced operations like fast forwarding, rewinding, etc. But nevertheless, if you have an existing program, it might take time to whip it into shap such that it fits the confines of a libretro program.

Right now, this SDL port is obviously in its infancy, and this might be an area where we could make use of further contributions.

To go over some of these:

To use libretro SDL in conjunction with your game program, right now you would first build the SDL libretro part. You run the Makefile and once successful, it will create a statically linked ‘archive’ (such as ‘libSDL_unix.a’ and/or ‘libSDL_win.a’). From there, you would manually link this archive into your libretro core. That way, your libretro program can interface against SDL.

If you want to see some test examples of how this is done in practice, go to the directory ‘tests‘. ‘opentyrian’, ‘sdl-mandelbrot’ and ‘sdl-tetris’ are three current proof of concepts. 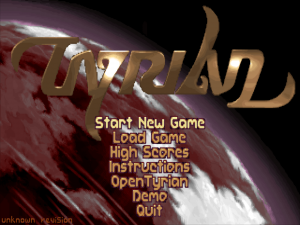 What does this mean for endusers?

It means that developers familiar with SDL have an easier time getting themselves acquainted with libretro. It also will mean that we can get SDL ports up and running quicker instead of having to reimplement and rewrite everything from scratch.

Right now, my current plan is to take the quick and dirty OpenTyrian port, and divorce it from most of its SDL idiosynchrasies and turn it into a nice, native, fleshed out libretro core. However, at the same time, I also want to help improve, build and foster further work going into libretro SDL. So if anything, we need to strive for even more well fleshed-out tests at the same time.

We want to thank r-type a lot for coming up with this wonderful Proof-of-Concept. Without him, this project would have barely stumbled out of the gates and it would have taken many more months for it to end up running anything. Hopefully we can once return the favor for all the hard work and effort guys like this have provided to our project. It’s the passion and the commitment of most of the followers surrounding this project that keeps us going.