Approximately 5 hours ago, we were the target of a premeditated cybercrime attack on our key infrastructure.

The hacker did the following damage:

We are still awaiting any sort of response or support from Github. We hope they will be able to help us restore some of these vandalised Github repos to their proper state, and also to help us narrow down the attacker’s identity.

We wanted to clear up some confusion that may have arisen in the wake of this news breaking:

We’re still assessing the situation but moving forward, we think that it’s probably best not to go forward with the buildbot server that was compromised earlier today. We had some long-term migration plans for a move to a new server, but this was always pushed back because we felt that we weren’t ready migration-wise. It might indeed be the case this is the catalyst for just starting all from scratch with a new server instead of trying to migrate the old one over. This would mean that the more commonplace builds for Linux/Windows/Android would be immediately available, but all the specialized systems like consoles, old MSVC builds and whatnot would have to wait for later until we have adapted this properly to the new system.

This brings us onto another key issue – the lack of backups. We last performed a backup of our buildbot server about a couple of months ago. The truth is that while we pay a hefty amount for the servers on a monthly basis already, there is simply not enough money to pile on automated backups as well. We could really use your support on Patreon to help lighten our financial burden here, especially since this now-pretty-much-mandatory server switch will likely cost us an insubstantial amount of money upfront while we keep the current server running for a month longer.

How will we restore things

So, how are we going to restore things? We hope that Github will be able to restore the affected repositories. If they are unable to do so, we could rely on the goodwill of users to source us with git repositories with the full history intact.

As for the buildbot? No idea to be quite frank. If we make the switch to the new server, you’ll get Android/Windows/Linux up and running early again but all other platforms will have to be added as we go along.

It’s a shame what is happening to the emulation and homebrew community. When it isn’t developers leaving for greener pastures deciding it’s no longer worth it, prestigious developers like byuu are being forced to early retirement because of unsavory online gang-stalkers. In our situation, we can’t rule out the possibility that some of these attacks come from some of the same usual suspects (it isn’t the first time we’ve seen them abuse AWS for some of these attacks, we encountered them a year ago earlier targeting our lobby services). Whatever their aim may be, while they will not deter our will to continue working on this project, they have definitely increased our maintenance and cost burden for the time being. And for this we ask for your understanding and support as we attempt to come up with a plan to address these problems moving forward. Supporting us through Patreon is a great way of helping out, especially if we can reach the $1300 goal which means we can spend a bit more each month to make sure our stuff is properly backed up.

As if the complications with Android’s new store policies that requires us to coordinate with new contributors to come up with a workable solution was not enough of a headache, this comes along. With your help and support, we will overcome this and come out stronger than before.

Regarding the Android / Core Installer situation

While we’re on this subject briefly, while it’s off-topic, we felt the need to address this real quick. We will likely be making a version of RetroArch Android that is neutered ONLY for Google Play. It will mean that the Core Installer will not be available for this, and cores will come packaged in additional APKs that can be installed. Apparently there is a 50-core extra APK limit on this until it starts requiring a version of Android over version 8.0. So while trying not to artificially bump the Android OS system requirements, we’re deciding on a 50 core-APK limit for now. Hopefully we can fit nearly most of the cores within such narrow constraints.

On our download site (and on F-Droid), we will have a RetroArch Android version that will work as before – with the Core Installer feature completely left intact. We feel this is a much superior version to what will be available on the Play Store, but unfortunately Google will force our hand here.

RetroArch 1.9.0 has just been released.

Probably the highlight of this release – there is a new ‘Explore’ view for all playlists.

The Explore view takes advantage of the Libretro databases’ metadata history of content. It allows you to search / find content based on criteria such as:

The metadata is currently a bit on the incomplete side, but you can expect us to add more and more metadata to the Libretro database as we go along. This is only the beginning.

There are tons of ways you can use the Explore view to find what you want. Here are some of them:

Here is a good example of the kind of powerful context-sensitive filtering that is possible with the Explore view.

NOTE: It should be mentioned that in the future, if you want the metadata to be updated automatically in existing versions of RetroArch, you should go to ‘Online Updater’ and select ‘Update Databases’. After this, you might have to restart.

That’s it. There is no way to continue searching from that point, or to do much of anything, really. It’s mostly a non-feature…

The search functionality has now been enhanced as follows:

Here’s an example of the search feature in action:

A new “Load Content” Startup Notification option has been added under Settings > On-Screen Display > On-Screen Notifications. When enabled, a brief animation is shown whenever content is launched – it looks something like this –

Before, when you wanted to remapp inputs via the Quick Menu (Quick Menu > Controls > Port N Controls), the user had to press left/right ad nauseam in order select an appropriate core input for each controller button. This is somewhat cumbersome, and highly awkward on touchscreen devices.

In this new version we have added drop-down lists to the input remap entries. For example, when viewing this: …the user can now press OK (or keyboard enter, or tap/click the entry) to open a list of available inputs:

This works for both controller and keyboard Device Types. 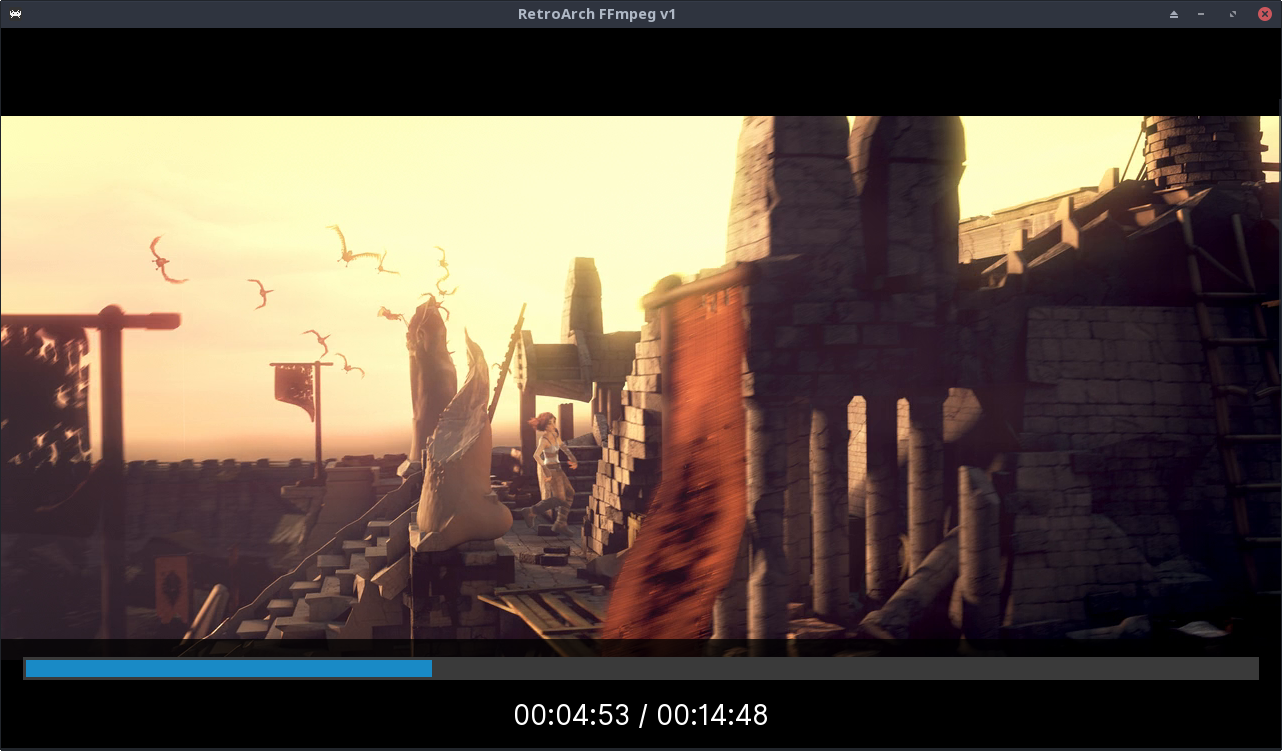 Currently the iOS/tvOS build will default to OpenGL because of a few outstanding issues that still have to be resolved: 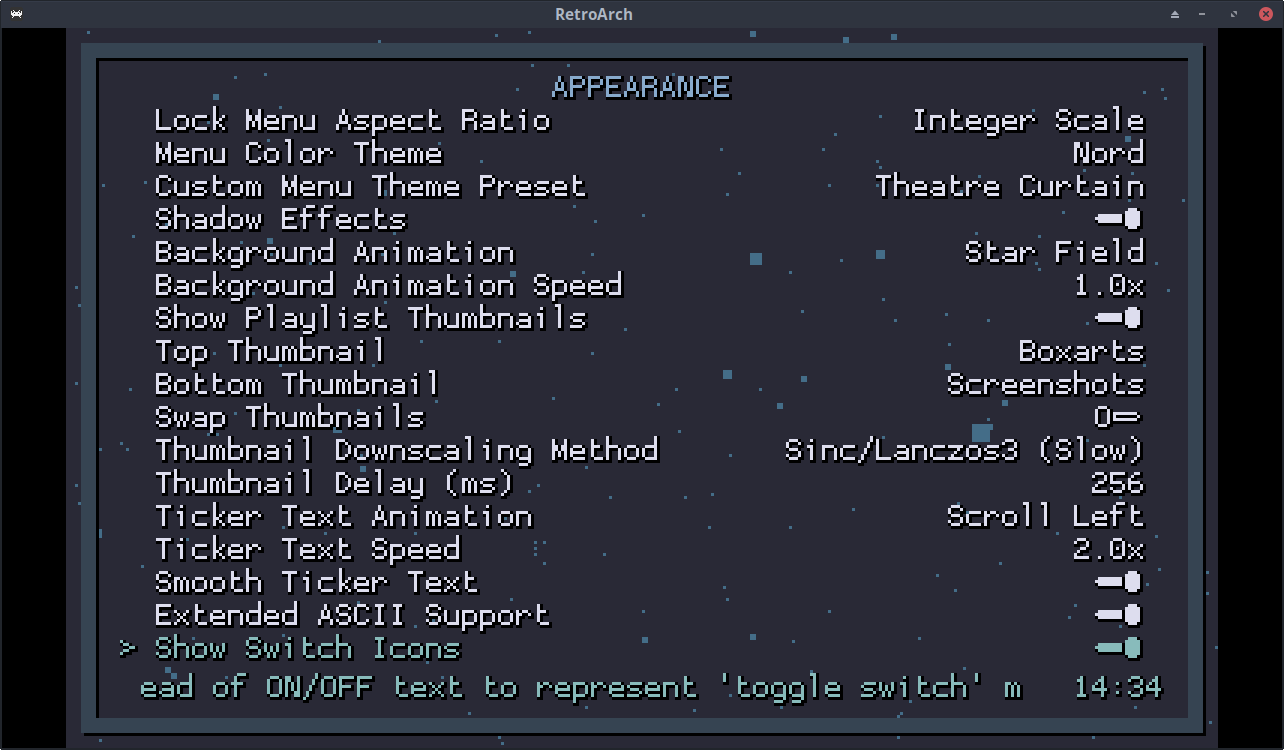 A significant amount of time has been spent reducing RetroArch’s memory footprint and reducing disk I/O overhead when doing menial operations such as loading a configuration file or a playlist inside RetroArch.

There’s much more to this release than meets the eye. See the CHANGELOG below for a more detailed breakdown.

We will follow this up with more news soon on all the recent core developments that have been going on. As usual with these blog posts, there’s a lot we don’t have time to touch on when it comes to bugfixes, improvements and additions to the Libretro/RetroArch project.

New and improved versions of the Dolphin and Citra cores will be coming soon. The PPSSPP core is now being actively updated again and should be up-to-date with the Git upstream repository. In addition to this, there are several other big new things that will be discussed soon.