RetroArch 1.8.1 has just been released. This version sees the coming of age of the mobile UI, which now has support for thumbnails. This will bring a transformative change to the way people get to interact with the UI on Android/iOS. And the best part is that this is only the beginning, even more drastic UX enhancements are planned!

If you’d like to show your support, consider donating to us. Check here in order to learn more. In addition to being able to support us on Patreon, there is now also the option to sponsor us on Github Sponsors! You can also help us out by buying some of our merch on our Teespring store!

We’ve made the decision to enable the auto thumbnail scraping feature by default on Android/iOS since both devices are likely to be connected to the Internet. This is inline with what the majority of people on these platforms would want the default behavior to be. All other platforms remain unaffected – for systems other than Android/iOS therefore, it has to be enabled manually for it to work.

In case you are using your device offline and/or you don’t want a HTTP request to be performed every time you browse a new entry in a playlist, you can turn this setting off by going to ‘Main Menu -> Online Updater’ and turning off ‘On-Demand Thumbnail Downloads’.

We are beyond excited to present to you even more UX enhancements for MaterialUI, the default UI for mobile devices like Android and iOS.

There is now initial thumbnail support for playlists in MaterialUI!

RetroArch 1.8.1 adds the Thumbnails and Thumbnail Upscaling Threshold options under User Interface > Appearance, and adds two new options: Portrait Thumbnail View and Landscape Thumbnail View. There are currently only list view implementations, which look something like this: 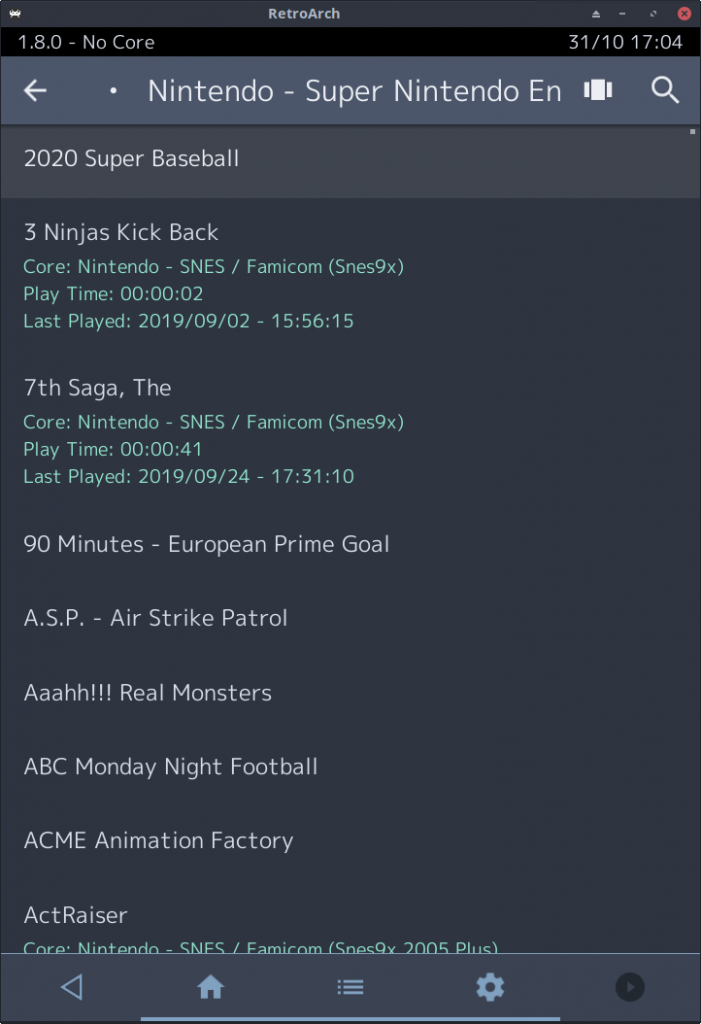 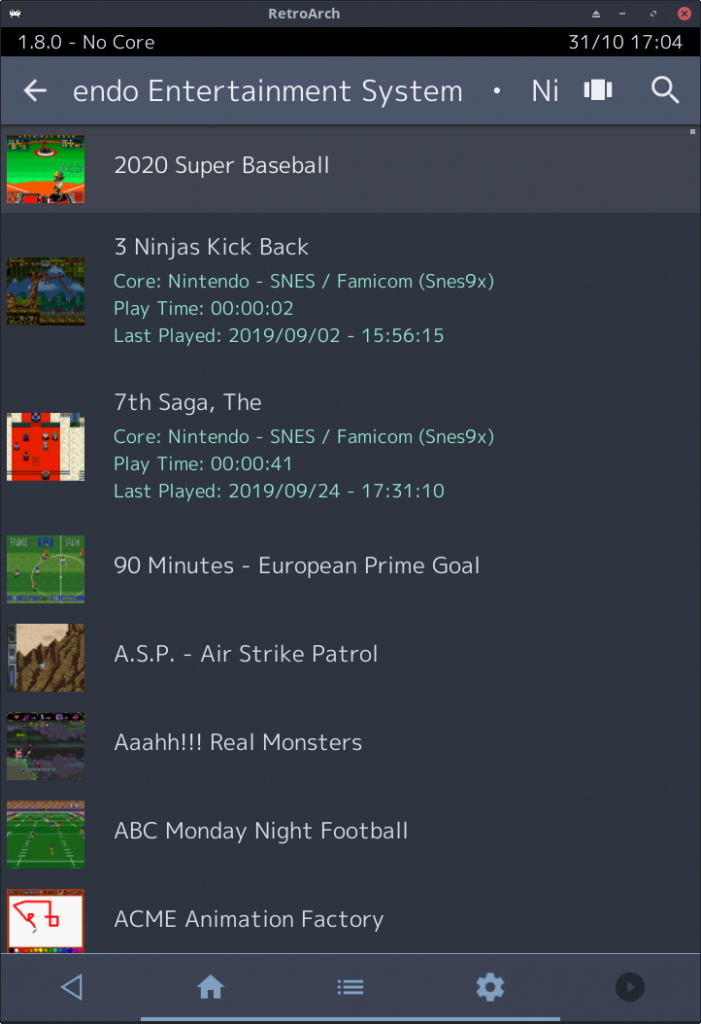 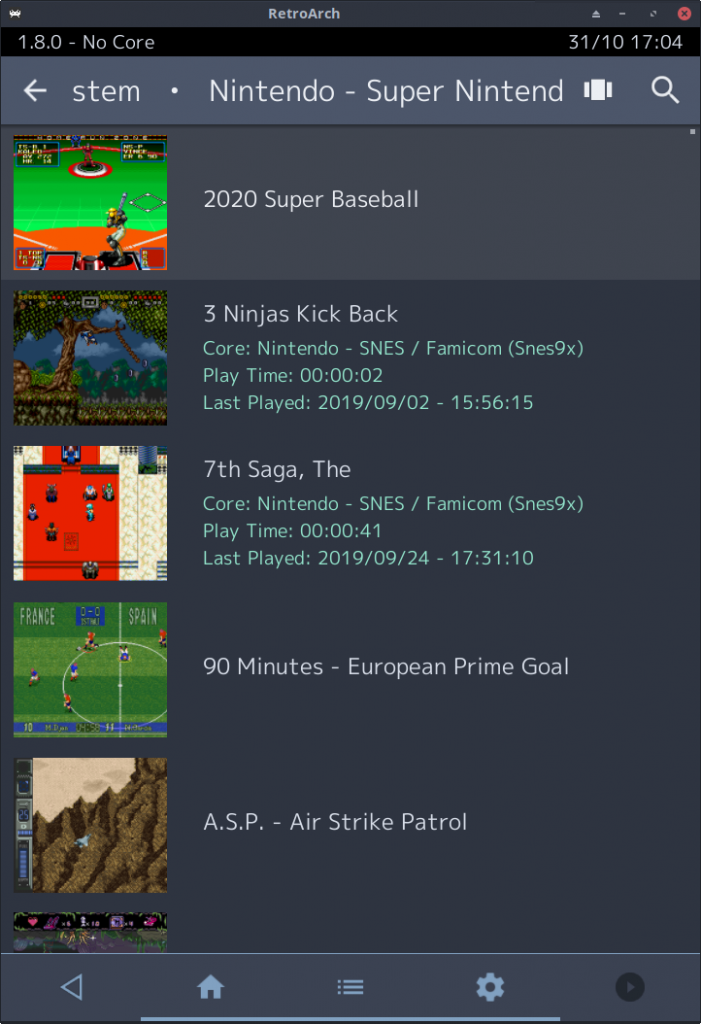 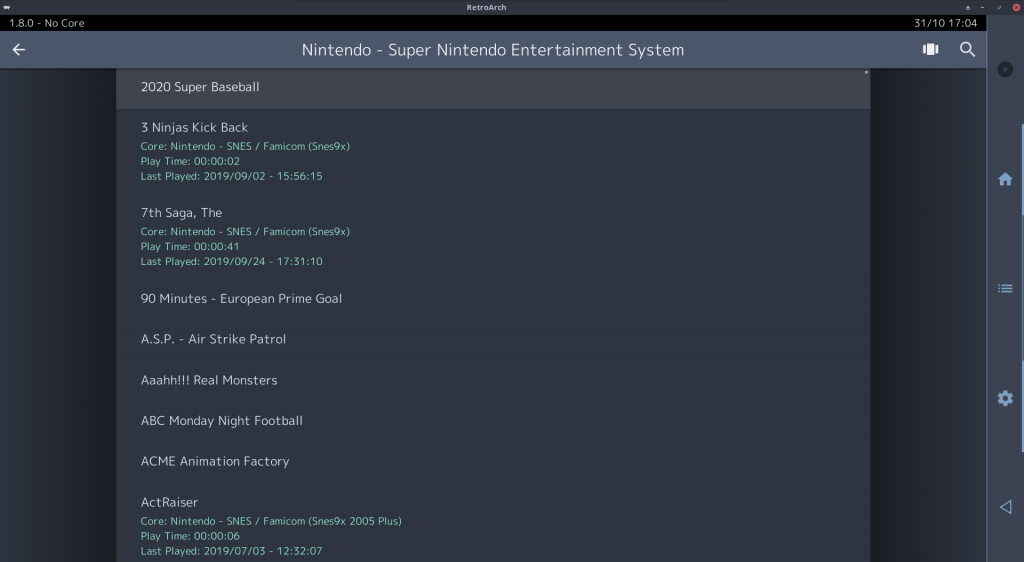 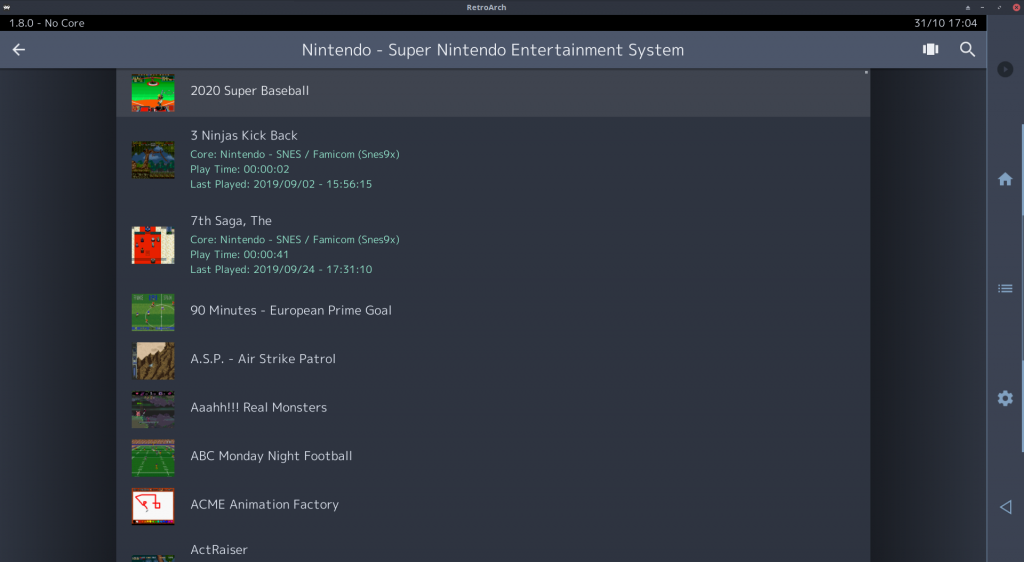 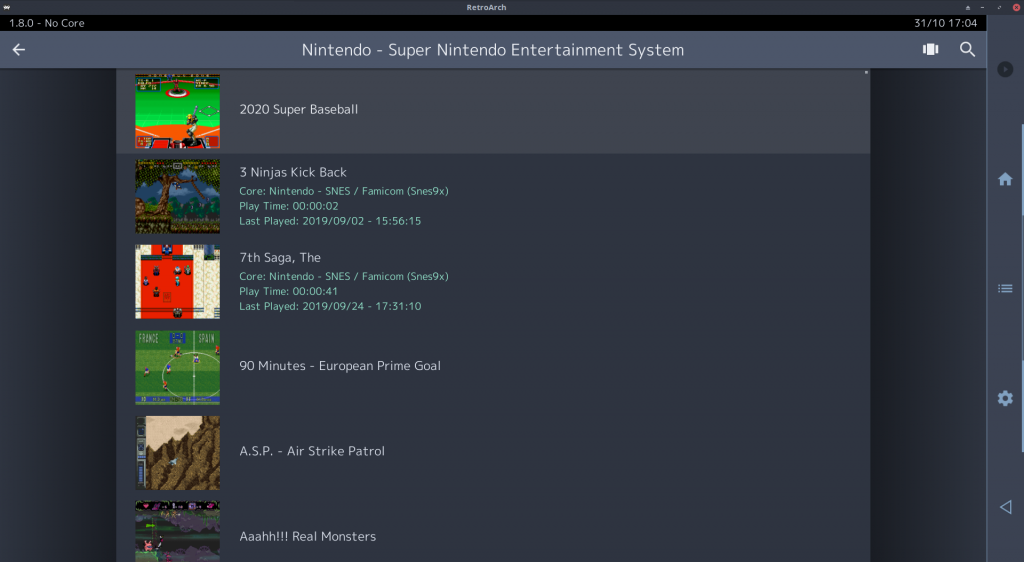 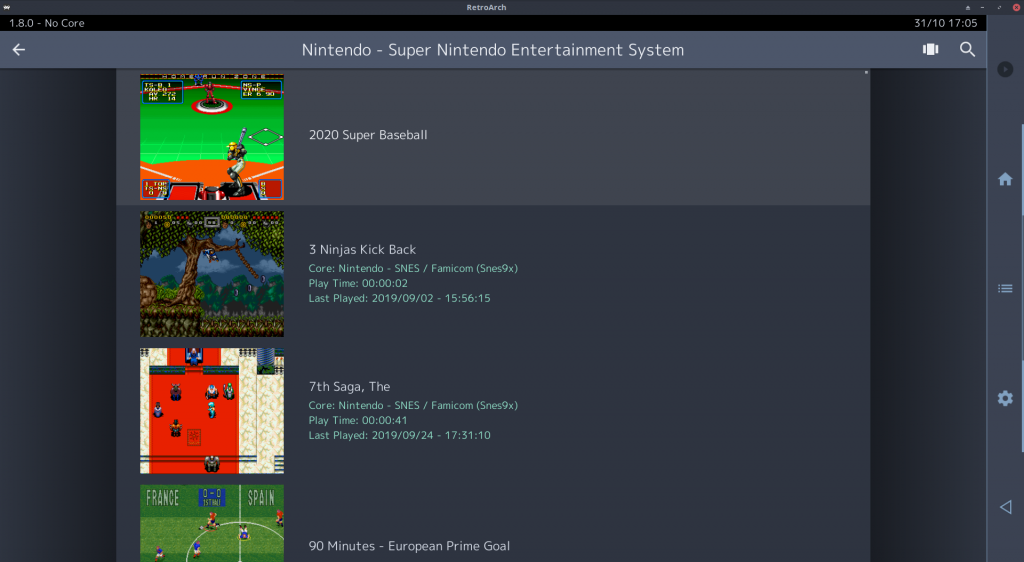 Note the new ‘switch thumbnail view’ icon on the title bar (next to the search icon). This shows up when viewing any playlist provided that User Interface > Appearance > Thumbnails is set to anything other than OFF. Touching this icon switches to the next view mode (this is done independently for each screen orientation). Pressing the ‘scan’ button on a gamepad (RetroPad X) has the same effect.

All loaded thumbnails have a nice ‘fade in’ animation. 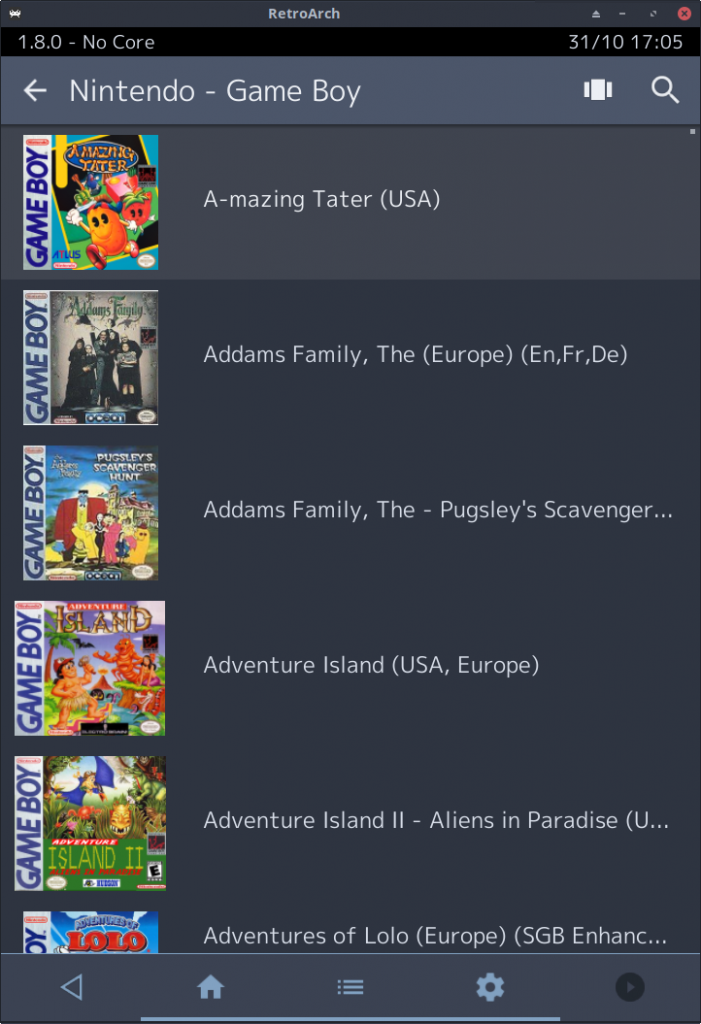 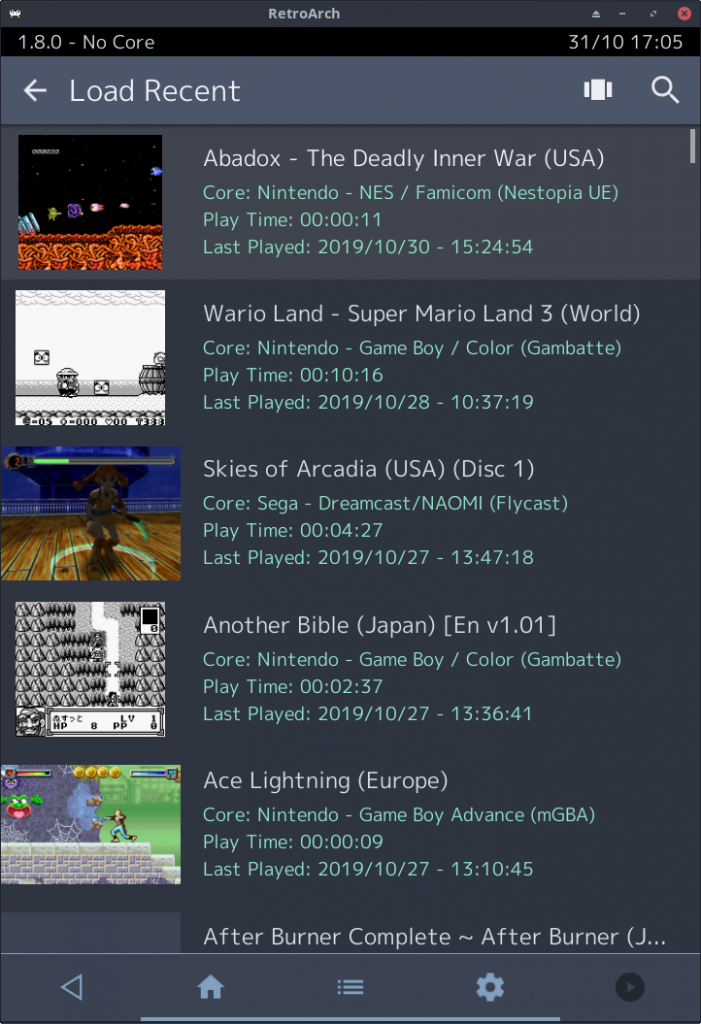 We implore everybody that might have bounced off earlier versions of RetroArch for Android/iOS to please give this new version a chance. We are trying our best to be receptive to user feedback and whip the UX into shape so that it becomes a user interface that you will come to love instead of tolerate (at best). Thumbnail support has been missing for a long time so this is bound to be a big deal along with the other UX enhancements that version 1.8.0 already brought with it

We will be following this blog post up in the upcoming days with more about the Doom 3 core that libretro devs have been working on. Stay tuned – this core represents a big milestone for us since it is a semi-modern game running as a libretro core inside RetroArch, and our aim has always been to appeal beyond the emulation scene. We are fully supportive of even more non-emulator cores in the future, but we won’t forget about the emulation scene either, and we have some BIG announcements coming up that still remain a secret. So stay tuned and wait for further information to arrive when the time is right!