RetroArch 1.7.7 includes many user interface tweaks and improvements. Here is a brief round-up of important changes:

Playlist display has been tidied up with some general housekeeping: 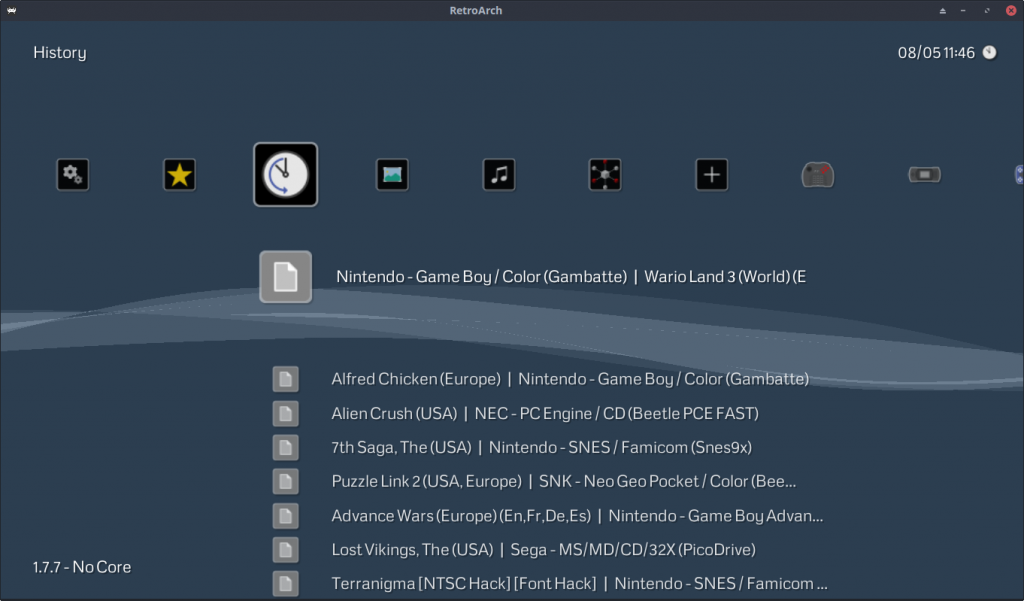 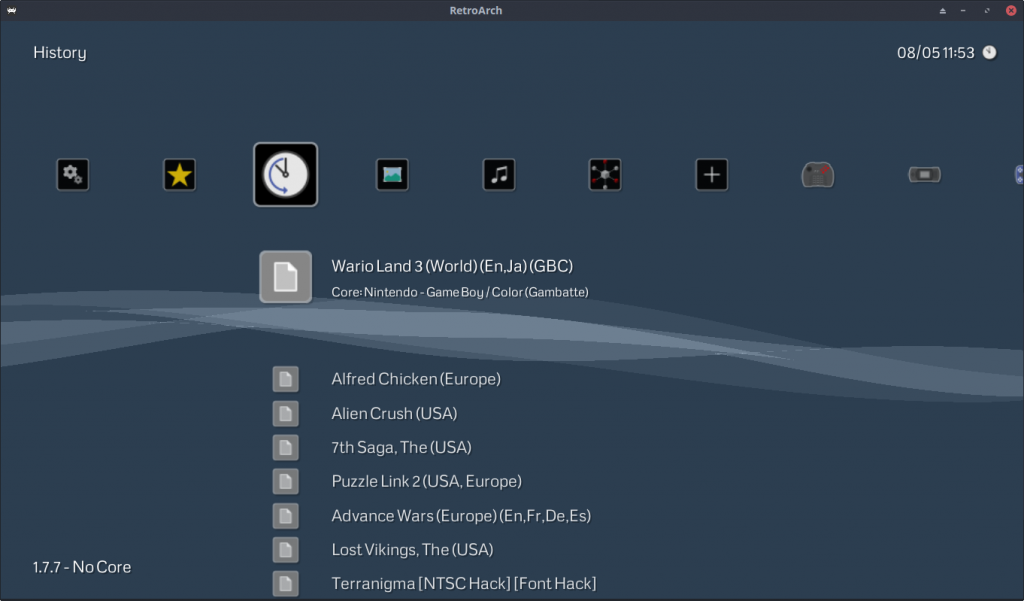 Sublabels can be enabled/disabled via the Show playlist sublabels option under Settings > Playlists. (Note: Users who disable sublabels but still want a ‘clean’ history/favourites can hide core associations via the Show associated cores in playlists option)

RetroArch can now keep track of your playtime. For most menu drivers, this information is presented via playlist sublabels: 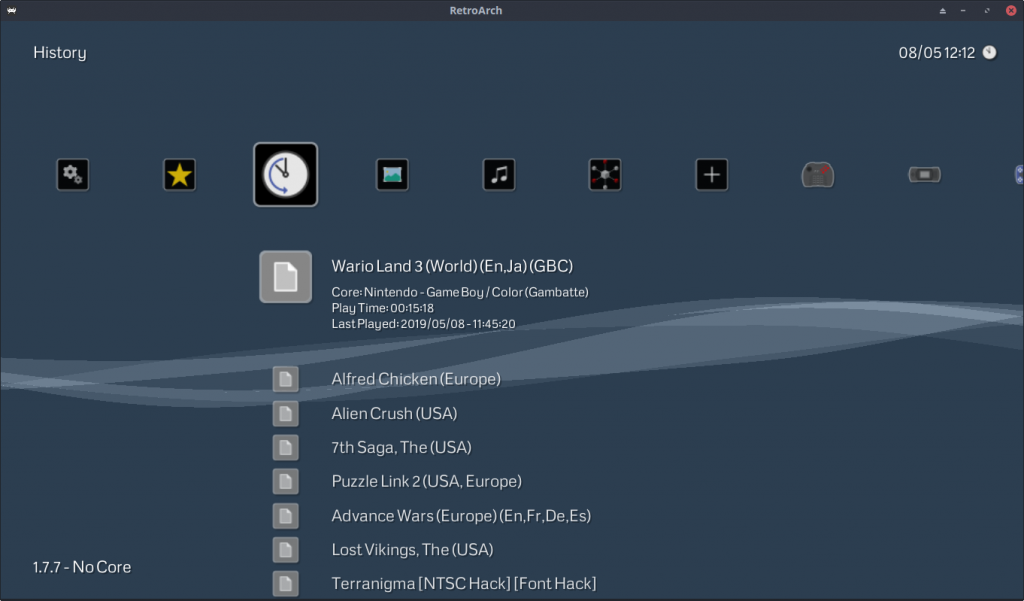 …whereas Ozone uses a side panel: 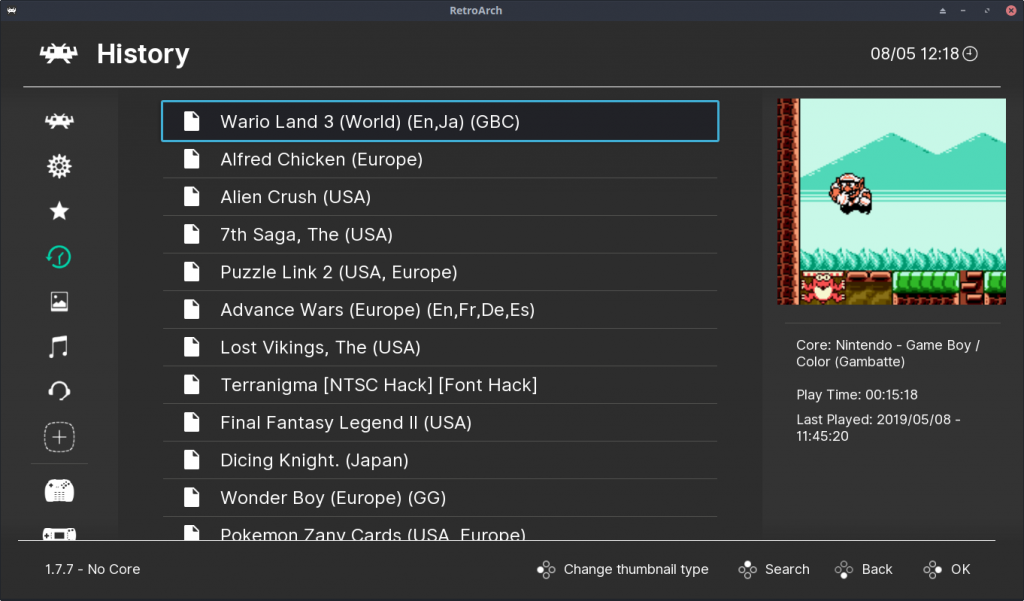 A Playlist sublabel runtime option under Settings > Playlists allows either log type to be displayed in the menu.

Runtime files are saved in JSON format, and may be edited by hand should users wish to add existing playtime accumulated before this logging feature was added. By default they are written to the following locations:

A small but significant improvement: thumbnails can now be displayed on ‘mixed content’ playlists – most notably history and favourites. 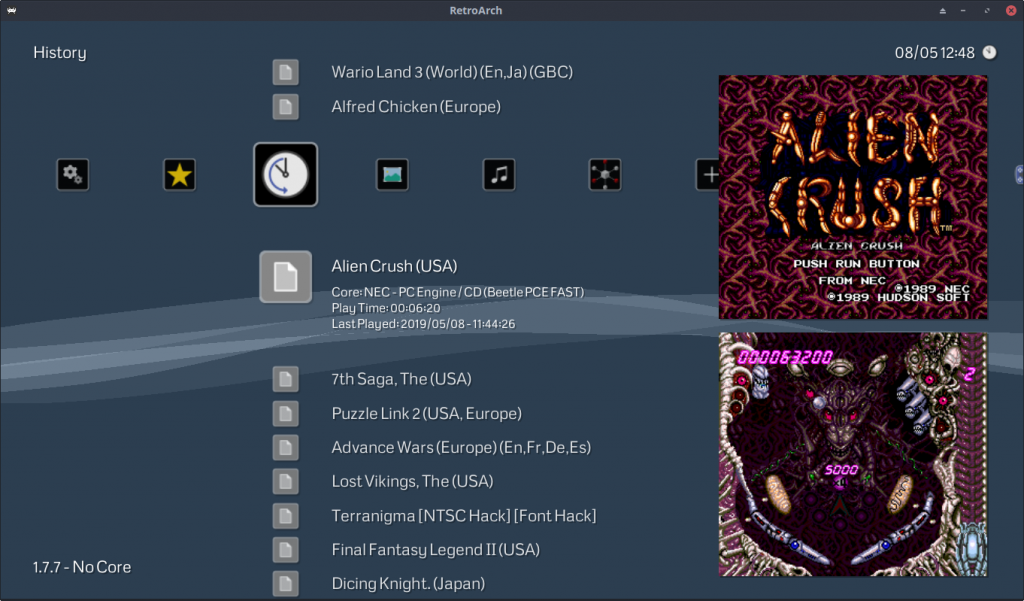 This works by correctly utilising the db_name field of playlist entries when searching for thumbnails. This information (when available) is now automatically added to history/favourites whenever new entries are created. (Note that history/favourites generated with the previous 1.7.6 release will need to be deleted/recreated for proper thumbnail support)

A caveat here is that content launched via the file browser (or command line) has no associated db_name – but we’ve added a workaround for this. Provided that the content directory and thumbnail directory have the same name, thumbnails will be identified and shown. This requires some external organisation (e.g. SNES ROMs must be placed in a Nintendo - Super Nintendo Entertainment System folder), but it means that – for the first time – users who rely exclusively on the file browser can still view thumbnails on their content history playlists.

Another small yet important addition…

RetroArch veterans will be familiar with menu ‘ticker text’ – i.e. the slow ‘back and forth’ scrolling method used to display text strings that are too long to fit on screen:

Many users think this is too slow, and reading text backwards is awkward – so now both the scroll speed and method can be adjusted via two new options under Settings > User Interface > Appearance:

The Scroll Left animation is a standard scrolling marquee, and combining this with a higher speed provides a more comfortable viewing experience:

(The new ticker is available for all menu drivers, and looks best with RGUI due its use of a fixed width font)

The venerable RGUI is often considered the ugly duckling of the RetroArch family, but with this release it can stand head and shoulders with XMB and Ozone. Here’s a highlight reel of the most significant changes:

Previously, RGUI had no way of displaying sublabels. These are commonly used in XMB/Ozone/GLUI to show informative ‘help’ text for each menu entry, but they also (for example) provide netplay room information and the content runtime metadata mentioned above. In other words, they are an important aspect of the user experience.

To remedy this shortcoming, we now have a Show menu sublabels option under Settings > User Interface > Views. When enabled, sublabels are printed in the space at the bottom of the screen where the core name would normally be shown:

A new Shadow Effects option can be found under Settings > User Interface > Appearance, which may be used to add drop shadows to all menu elements. This really makes RGUI ‘pop’, and greatly increases text legibility when using colour themes or wallpapers with lighter backgrounds:

The new Menu Aspect Ratio option under Settings > User Interface > Appearance allows the selection of both ‘regular’ 16:9/16:10 ratios and ‘centred’ variants – the latter can be used in conjunction with wallpaper themes to enable fancy border effects: 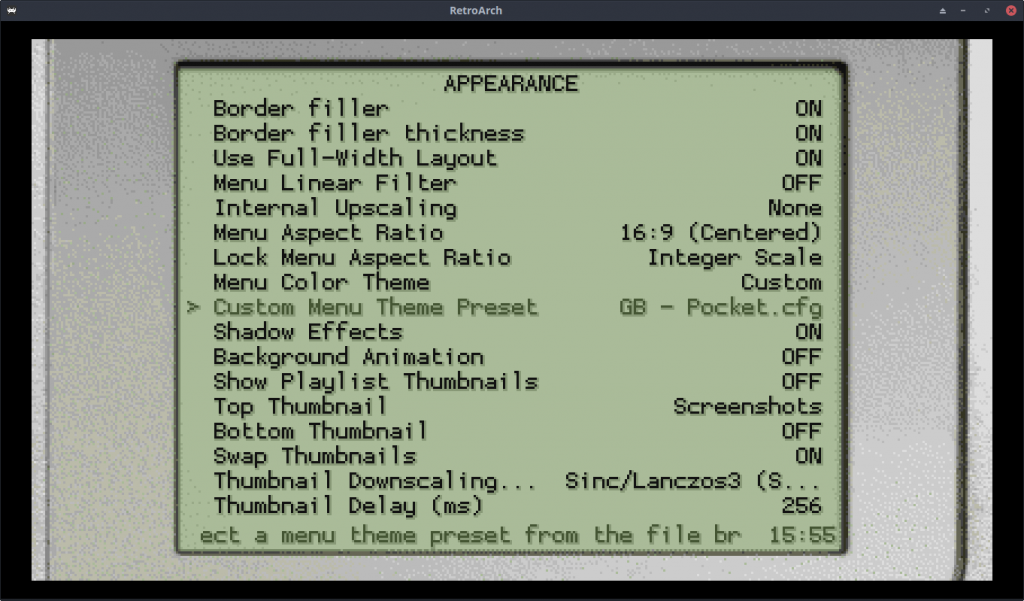 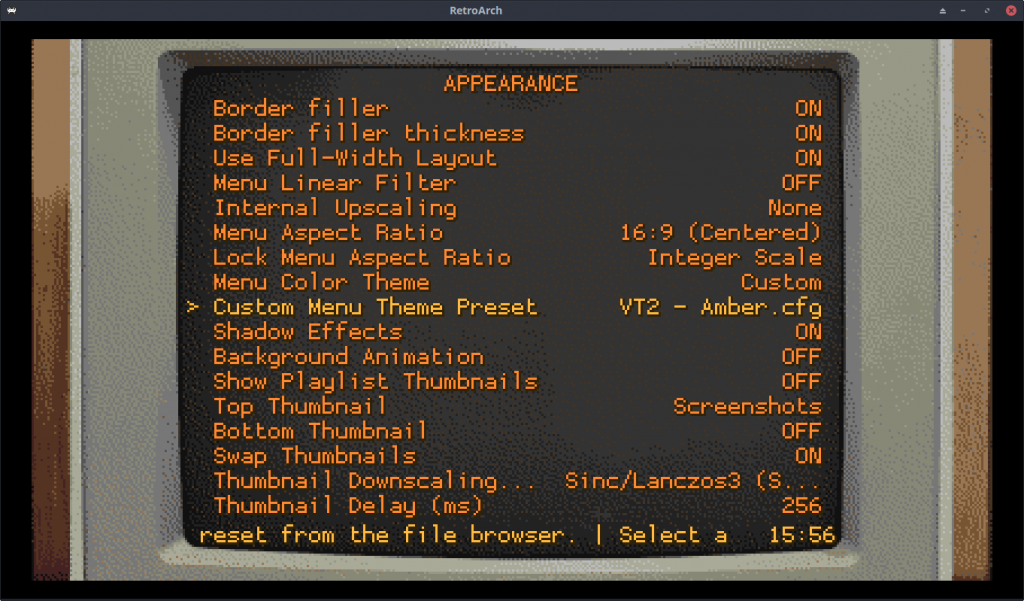 Closely related to this is the new Lock Menu Aspect Ratio option. By default, RGUI will stretch to fit the aspect ratio of the currently running content, which means the ‘Quick Menu’ is frequently distorted – for example: 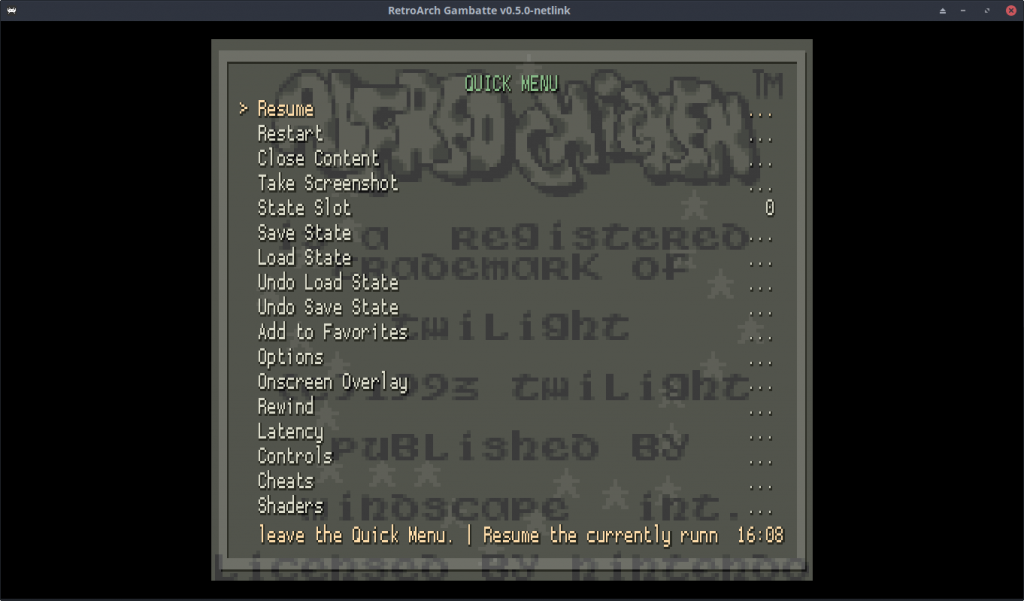 (Note that Integer Scale is recommended on most platforms, since it ensures that menu pixels are always perfectly square and free of scaling artefacts)

This is controlled via the following new options under Settings > User Interface > Appearance:

Of course, loading thumbnail images incurs a performance penalty. This is utterly insignificant on most platforms, but on devices with very slow storage (e.g. old Nintendo consoles, such as the 3DS) the overheads of handling thumbnails can produce lag when scrolling rapidly through playlists.

But this is RGUI: the inclusive menu driver. All kinds of hardware are accounted for. To this end, an additional Thumbnail Delay (ms) option is provided, which prevents thumbnails from loading until the selection pointer has been idle for the specified amount of time. Setting this to ~256 ms (or higher) essentially removes all overheads during menu navigation, while still providing responsive thumbnail display. This enables lag free, thumbnail-enriched playlists on even the weakest of hardware.

Prior to this release, the only way to enter usernames/passwords or perform searches in RGUI was to make use of a physical keyboard. Not any more. RGUI now has a proper gamepad-controllable on-screen keyboard, just like all the other menu drivers:

Traditionally, RGUI has only supported English as a display language, since it was limited to the 128 characters of the standard ASCII set. With the 1.7.7 release, a new Extended ASCII Support option has been added under Settings > User Interface > Appearance, which (at the cost of a miniscule performance hit) allows another 128 ‘special’ characters to be shown. When this is enabled, RGUI gains full support for the following additional languages: 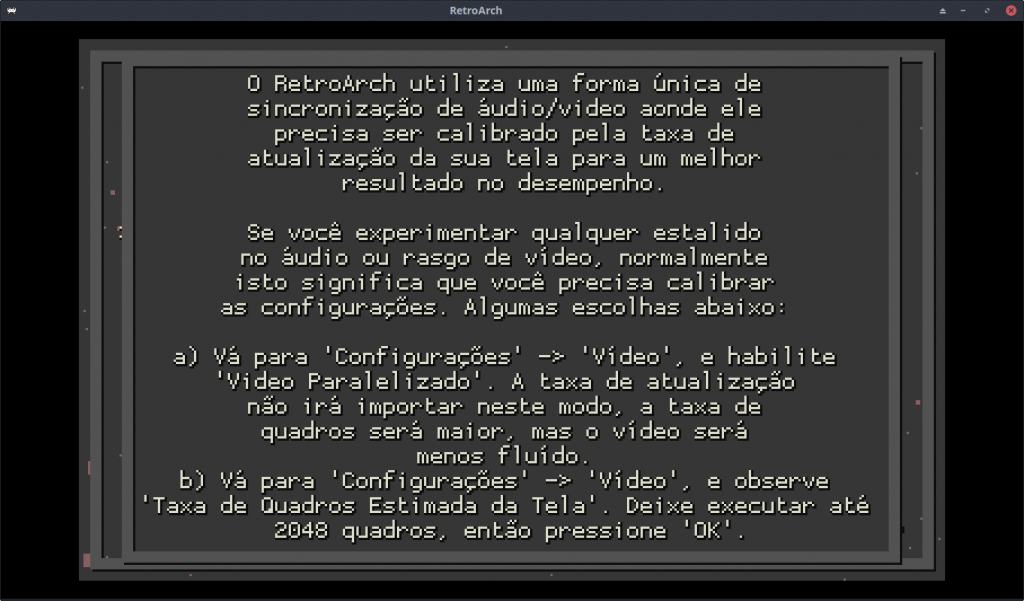 Despite these enhancements and additions, the performance overheads of the RGUI ‘render’ function have been reduced by almost an order of magnitude. This means RGUI is lighter and leaner than ever before, and users of (virtually) all platforms can enjoy the extra ‘bling’ at no added cost.

(Even 3DS – one of the weakest devices we support – runs full speed with every RGUI feature enabled, including the particle effect animations described here)