RetroArch 1.7.3 has just been released! Grab it here.

RetroArch now has a WIMP GUI, powered by the powerful multimedia framework Qt! This feature is available currently for Windows and Linux. macOS users will have to wait a while longer for this feature to arrive to their platform.

The WIMP GUI works as a companion to the main RetroArch window. You bring it into view by pressing the F5 key on your keyboard. From there, you can do many tasks:

– Select a game from any playlist
– Browse the file system or any attached media storage device and load a game.
– Scan directories for content and generate system playlists.
– Associate cores to an entire playlist or associate only one entry of a playlist to a specific core

Some things we’d like to note:
* This has been the combined work of bparker and Tatsuya79 that have worked tirelessly on this for a month. We are aware of several features that we’d like to implement, such as playlist editing, grid view layouts, etc.
* We are open to feedback on the GUI.
* You will likely not see this WIMP GUI on Android or iOS (or any game console for that fact) anytime soon. WIMP interfaces don’t lend themselves well to devices that rely on touchscreen or gamepad-based controls.
* (For Linux users) The Qt GUI should definitely work on X11. If you’d like to run it on Wayland, make sure you have the appropriate packages installed for Qt5 in your package manager. Be aware that Qt 5 cannot gracefully fail right now in case a platform module/plugin is missing from your system. This means that if you invoke the companion UI by pressing F5 on Wayland, and for whatever reason the platform module that Qt relies on in order to work on Wayland is not there, there is no way for RetroArch to gracefully fail there and just not show the companion UI. There will be a crash instead. Unfortunately we have talked to some Qt developers and they see no other way around this for now. The same situation applies for DRM/KMS right now. If we can find a better solution to this, we will certainly return to it.
* (For mac Users) You will have to wait a bit longer for this to arrive to the Mac port unfortunately. Hopefully that wait is not too long.
* We would like to still improve initial bootup times for the companion UI. Right now, on first initial startup, it can take anywhere from 5 to 10 seconds (depending on your harddrive and its performance), but on subsequent boots should only take 2 seconds or less for first startup. Hopefully by resorting to Link Time Code Generation and other avenues we can shave off some more seconds off this boot time.

Starting up the UI on startup 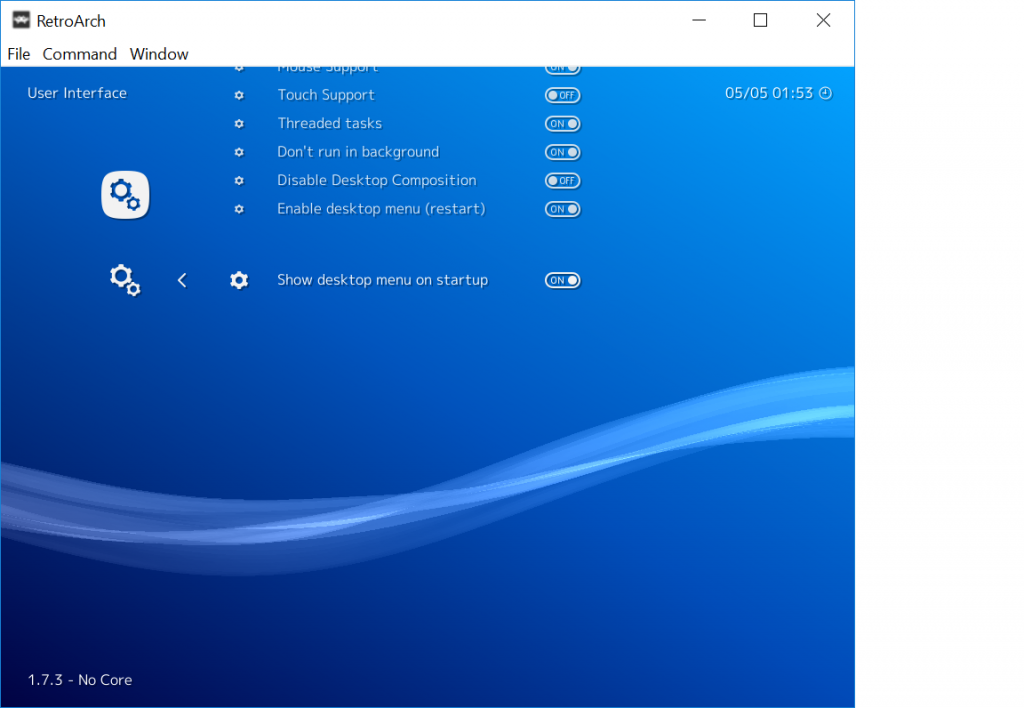 If you would like to start up the companion UI at first startup instead of having to manually press F5 first, you can do so. Make sure that Advanced Settings are enabled first (Settings -> User Interface -> Show Advanced Settings). After that, make sure the option ‘Show desktop menu on startup’ is enabled.

In RetroArch 1.7.3 we have given RetroArch’s built-in audio mixer a huge overhaul.

Live manipulation/control of the audio mixer in the menu – you can now access the audio mixer inside the menu. You can set audio tracks to each of the 16 available streams, and you can issue commands to them such as Play (normal/Looping/Sequential), Stop or Remove.

Individual volume setting per audio stream – You can now also individually set the volume for each separate audio stream inside the mixer. If you wish to override all audio stream’s volume with one global override, you can go to Audio Settings and set Audio Mixer Volume Level. Reset this back to 0 dB if you want individual volume per stream to work again.

Increased the amount of max streams – Previously, the audio mixer was limited to 8 streams in total. This figure has been doubled to 16.

New album mode-like features – If you have a couple of tracks queued up in the audio mixer and if you’d like to play them back like a regular audio music player (played sequentially, one song after the other) – select ‘Play (Sequential)’. When the song is finished playing, it will look at the other streams directly down below it. If one of these streams is in ‘stopped’ state and if there is audio loaded there, it will start playing it. It will also in turn set this audio stream’s play state to ‘Sequential’ and it will keep going down the list until the end of the audio stream mixer’s ‘list’ has been reached.

Music can play inside the menu now – Previously, you could only listen to audio streams with the audio mixer once you were inside a game and a core had been loaded. Once you went back to the menu, the sound mixing would stop there. You can now set ‘Enable menu audio’ to ON in order to be able to have music inside the menu as well! You can seamlessly jump back and forth between menu and game and have the music continue running.

Other additional niceties –
* The music is mixed in with the rest of the core’s sound data, so the music also is affected by fastforwarding and is thus sped up when you fastforward it, just like regular game audio would.

NOTE: Not all platforms have received MP3 and FLAC support yet. So far, we have enabled it already for Windows, macOS, Linux, Android and iOS. More platforms might follow.

Starting as of version 1.7.2, RetroArch now has the ability to query cores for their exact video timing data, which can be used to switch to native-resolution, 15 kHz modelines for use with standard-definition CRT TVs.

This is a big step for retro purists, as RetroArch can now output “pixel-perfect” video with accurate timing to compatible displays, even quickly switching between interlaced and non-interlaced modes on the fly.

This capability was previously Windows-only and requires modelines to be created in advance by CRT_EmuDriver or Custom Resolution Utility with a compatible GPU.

Starting as of version 1.7.3, Linux support has been implemented too! 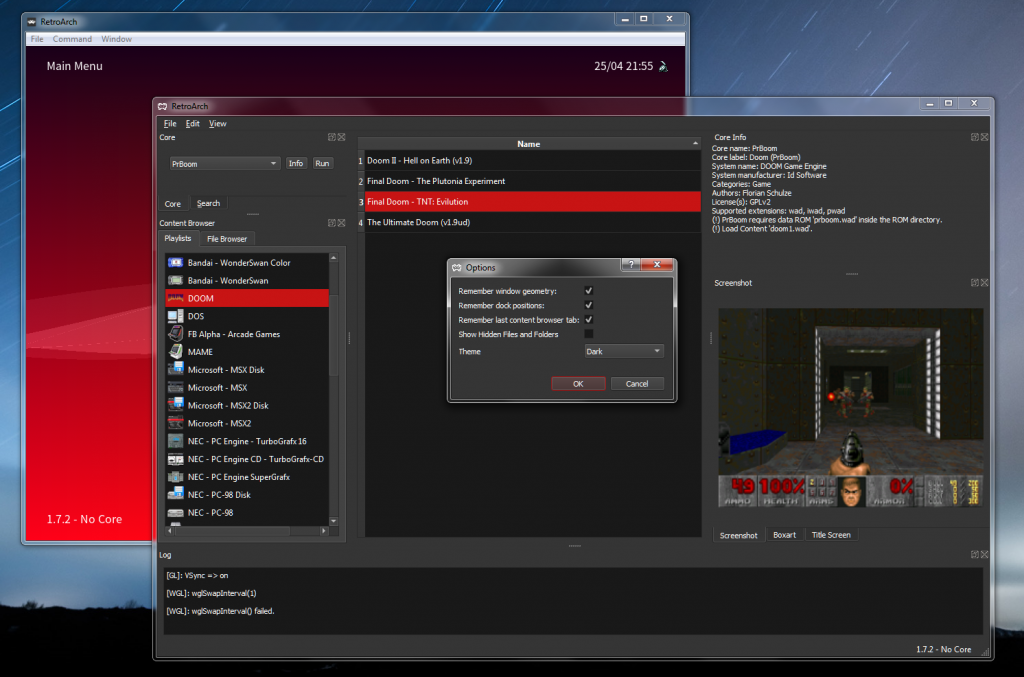 What is coming next?

We can already give you a sneak peek of some of the new features the new WIMP GUI will be having in the upcoming version. Right now, playlist entries are only displayed as a list. The new version will also allow you to display playlists in a grid view (both small and big). See the images below for an indication of how that will look like. 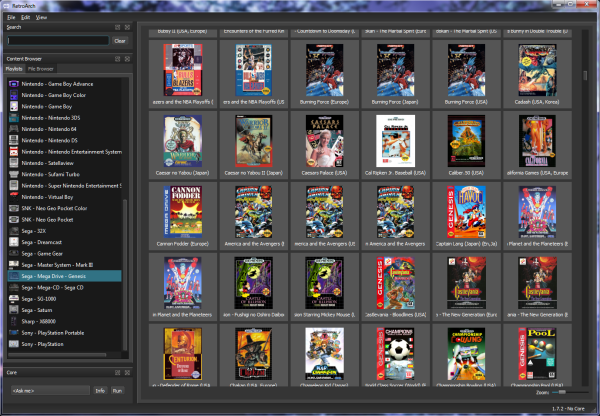 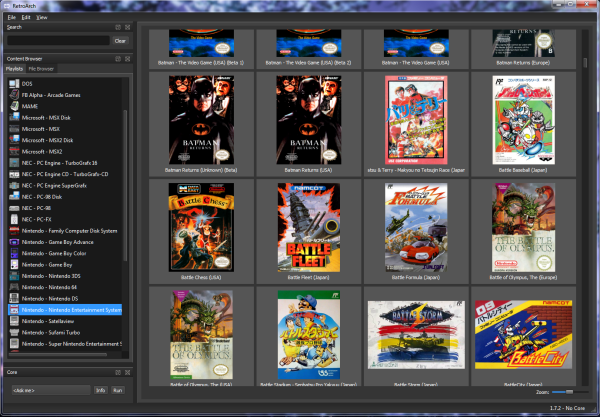