Due to the efforts from CompCom and other members of the ModMyClassic community we are happy to announce the pre-release of the new PlayStation Boot Menu + RetroArch for this year’s Christmas holidays! 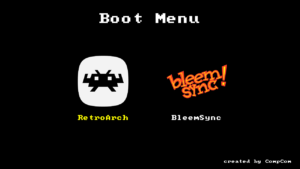 Whilst this pre-release is a working beta of a future development of BleemSync, we felt that you guys should be able to give a try and have some fun with it over the holidays.

Included in this pre-release is the Boot-Menu by CompCom, RetroArch for the PlayStation Classic and an initial batch of 91 cores. (Emulators) Please note that this is a pre-release of an upcoming module and development! This means that we are expecting some issues and shouldn’t be considered as a final release. This includes all of the 91 cores listed for the console, we haven’t had time to fully test or polish the builds for the PlayStation Classic but the majority should work absolutely fine.

Because of this, we ask you that you please notify us of any issues you encounter in our PlayStation Classic support channel in our discord here. We thank you in advance for your feedback and we will work on making improvements/fixes based on any feedback given to us.

To download and read how to use please go to: https://modmyclassic.com/?page_id=1229 for the full instructions and links.

Everyone at ModMyClassic would also like to wish you a happy Christmas and happy holidays!

Libretro has teamed up with ModMyClassic (formerly Hakchi Resources) to provide Libretro with their own official “Classic” platform offering for the classic consoles such as the NES Classic, SNES Classic, C64 Mini and the PlayStation Classic.

This now means you can download both stable and nightly builds of RetroArch and majority of the cores directly from official sources which are built and optimized specifically for the classic consoles.

We (Team Classic+) on behalf of ModMyClassic have been liaising with the Libretro developers on multiple cores to resolve numerous performance issues, bugs, crashes, and have gone through each core one by one to ensure that you receive the most compatible and best performing experience on your classic consoles.

As of writing this article there are currently 83 cores available for download in varying formats. (Raw .so, Compressed .so, zipped .so, hmod and compressed hmod) There will be more added to this list in the coming weeks and the inclusion of a “Classic” platform of RetroArch built specifically for the NESC and SNESC (based of HR’s RetroArch “Neo” build)

We are still working on this official “Classic” offering however you can find the WIP nightly builds here: https://buildbot.libretro.com/nightly/classics/

This means that ModMyClassic (formerly Hakchi Resources) will no longer be providing “3rd party builds” of RetroArch or its cores. It will only provide the builds directly from Libretro sources to ensure that any improvements made between developers ends up benefiting everyone in one single collection.

We also added a simple to use “Classic” platform to all of the core makefiles which we will expand on with future classic consoles. You can compile them for your own needs if needed. We added ARMv7 Cortex A7 (Hard Point with Neon) builds so you can also compile these for your own needs, or to use as a template for any other ARM based device. If you have a different architecture ARM device you should be able to easily adjust the classic platforms slightly to suit your needs. We will be providing a detailed compilation guide for the classics and other ARM devices in the libretro documentation in due course.

Apart from every single core on the list having been optimized, vetted, and tested to ensure they run at peak performance and stability, there have been a number of notable changes and improvements to some of the cores and their “Classic” versions. (Please note that some cores will run badly on the limited hardware. No amount of build optimization will fix this!)

RetroArch now ported and running on the PlayStation Classic

Thanks to the efforts of Team Classic+ (Especially CompCom) we have now ported RetroArch and all of the current 86 classic cores to the playstation classic. Here is a small video showcasing the functionality:

We at ModMyClassic are extremely happy and enthusiastic to be working alongside Libretro and by forming this partnership we hope to better the “Classic” offering and provide the best end user experience possible. Whilst this is announcement is a WIP post, we aim to have the official Lbretro “Classic” platform of RetroArch and Cores polished and fully released in the upcoming month.

Please note that ModMyClassic is still in the process of a rebrand from Hakchi Resources and we are currently working at full load to try and get this finished as well as the “Classic” builds. Please excuse us if you check our website if it’s out of date as we are currently redoing everything from scratch which includes all of our APIs, build servers and deployment servers.

If you have any specific qustions regarding RetroArch on the classics or classics in general, please feel free to ask us directly in the ModMyClassic Discord and we will try and answer your questions/resolve your issues.

Big thanks to Autechre for helping make this partnership a reality and facilitating the project. Lastly, many thanks to all the members of TeamClassic+, m4xw, markwkidd, grant2258, gharby, robloach, flyinghead, radius and anyone else who helped to resolve issues and worked on the project.